About his success Robert was surprised to receive this award. He always thought he did ok in his exams receiving fairly high individual scores in his last three papers, but […] 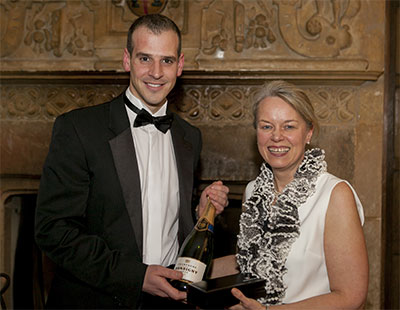 Robert was surprised to receive this award. He always thought he did ok in his exams receiving fairly high individual scores in his last three papers, but didn’t even consider an accolade like this would be achievable, it wasn’t on the radar. Like Naomi, his focus was purely on passing the exams rather than aiming for anything else.

Robert’s study strategy was always to start looking at modules early to give himself as much time as possible to learn and revise. He’d describe it as “a lot and often.” He also adopted an organised approach and kept to a routine, not allowing himself to think he had a long time/that the exams were a long way away. This was a technique he’d learnt at university that served him well then.

He was fairly pragmatic in understanding that he would have very little free time and accepted that it was going to be a tough couple of years, making time for himself in evenings and on weekends. He would always try and do something at the weekend that he could look forward to, even if it was just going out with friends etc.

Robert didn’t have a real career plan when he first started training, other than to just complete the contract and then step back and think about it. Now he’s qualified, he’s thinking about studying towards his CTA (tax specialist) exams with a view to specialising in that area.

He’s very happy at his firm Francis Clark, and will look to remain in corporate division there for the foreseeable future, especially if he does undertake further study. The firm have been very supportive of him, in helping to balance out his work and study, as well as providing a student council as a support network and a partner mentor.

Advice he would give to current/new students

First of all he advises students to make friends with as many fellow students as possible, as it makes a massive difference to morale and success. When it came to the Case Study paper, his group all went away to read it individually, then all put heads together to discuss it. He believes his success in that exam in particular is thanks to them.

Be open with your employer about what is important to you and your priorities and challenges. Speak to your student counsellor regularly, and go over your reports with them. If help is there, use it.

Be prepared and structure your work well. Don’t just do the classes, start putting work in on your own time as well as early as possible – it helps save the stress and cramming towards exam time.

One of the key benefits of studying at the Reed Business School is relationship development. By building relationships with a group of other people all going through the same thing, you have a good support network, and some things are easier to go through with a mate rather than a tutor in the first instance.

He really enjoyed his time at the school, especially being quite fresh from university. He admits it was quite intense, but having your meals cooked for you and being able to have a bit of a lie-in and relax in the down-time was really valuable.

He says the teaching was really good, and everyone in his group would agree. Even though people learn at differnet paces, he felt the classes were run at a good pace, notes were good, the teachers were great at answering questions, and they always made time for one to one ones if there were any queries.

He also really appreciated the amount of work they set for you to do at home, and was really impressed at the level of marking and feedback given – sometimes within a few hours. The group would be set questions most days in class, with the turnaround time for feedback during the week really useful. Keen students would also do more questions in the evening if they wanted, which would also be marked as soon as possible.

Robert only has good things to say about the school overall. He says it was a positive study environment, with a great structure, and perfect for doing the ACA qualification.

He admits the most difficult thing was maintain a balance between his work, life and study. As he spent a lot of time on the road, it was sometimes tough to manage expectations on all fronts as well as giving himself space to breathe, but his organised approach got him through it.