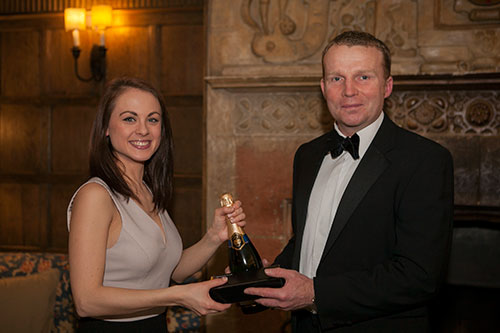 She joined the company on a three year training contract, having become disillusioned with the sales focus of her previous banking job. She had no set career plan, but felt very lucky to secure the training contract with a good firm, and put her head down focusing on her exams one at a time.

As part of her contract, her firm paid for all her exams, and gave her time off to study. At work she was involved in personal tax, corporate tax and preparing accounts, generally for smaller businesses. She was assigned a designated training partner at the firm (Kieran McCurdy) as a mentor, who she had six-monthly reviews/appraisals with, focused on her development. She found this really useful and is very thankful to her firm for their support.

Now she’s qualified, she wanted to move out of practice and into industry, in order to get more hands-on experience with accounts for larger firms.

In relation to the awards, she had no idea that she had performed that well, and was never focussed on trying to win any prizes, rather concentrating on just passing each exam.

She attributes her success to hard work. While there might be some bravado from some students in saying that they don’t need to work hard, she believes anyone who says it isn’t hard work is lying! She made sure she put the hours in, working every lunch time and 2-3 hours most evenings as well. In the last year, it got particularly challenging, requiring even more focus.

“They’re amazing!” She had nothing but admirations for all the teachers, and shared how they would happily stay to sit and talk a problem through with you on an individual basis after class, encourage everyone to ask questions. Naturally there was a lot self-study, but she said the tutors were always on the end of the phone if students had any queries.

Students are very much encouraged to ask questions at any time, in fact the tutors don’t like silent classes where there isn’t any discussion. The peer learning and support of the cohort was a really valuable aspect of Naomi’s study path as well. Her class got on well with each other and supported each other, which really helped everyone.

She would advise anyone studying to speak up and get engaged in discussions with tutors and peers. The classroom environment is best way of learning, as it’s a safe place to be able to ask anything.

Her training programme worked on a block release basis, where she’d spend a week at the Reed Business School as an introduction to each module that term, before going back for subsequent weeks in the run-up to exam preparation.

She really liked going away to middle of countryside to study, where all the cooking and cleaning was done for you, it certainly makes it much easier to focus on the studying. By studying at home she says students would also have to deal with the rest of their life at the same time, but at the Business School she did not have to think about that.

The programme also helps the students bond as a group: staying in cottages with peers outside of study time makes you more comfortable to discuss and challenge things once in the classroom.

About balancing work and study

Naomi is an organised person and likes structure and routine, committing a set number of hours each week to her studying. She would also take part in regular peer conference calls to discuss individual chapters, which were a really good way to make sure you’d read everything and prepared to have detailed discussions on each call. She says it helps to solidify it in your head if you have to explain it to someone else, and believes this was a very useful part of her studying. The competition element among the group in comparing marks for each paper also gave a bit of extra drive.

She believes students should balance out their time, especially to avoid burning out quite quickly or running out of drive by the end of their studies. She would structure her life to fit in elements like going to the gym, taking a break/night off each week and making sure she got time to properly relax.

The whole process was quite difficult and she found it quite difficult to pinpoint one thing, but believes some of the exams are pretty hard, in that some of the topics weren’t applicable to work scenarios she knew about, making it a challenge to get in the mind-set of what was required.

To new students she would say relax and don’t stress out about it. It’s easy to get overwhelmed, but just be organised and put everything into perspective.