Making waves: the journey of a two-time Paralympic medallist to trainee accountant - Reed Business School
Back

Making waves: the journey of a two-time Paralympic medallist to trainee accountant

Nikki Birrell is a two-time Paralympic medallist and five-time world champion in sailing, who was first selected to represent his country aged just 18. Now he’s studying accountancy at Reed […] 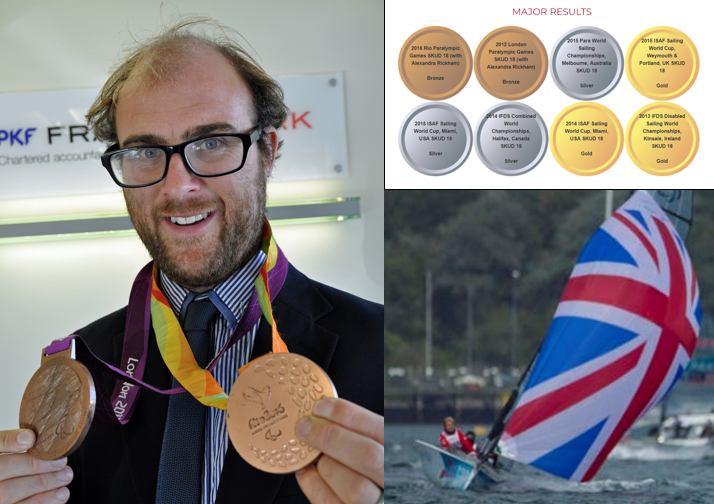 Nikki Birrell is a two-time Paralympic medallist and five-time world champion in sailing, who was first selected to represent his country aged just 18. Now he’s studying accountancy at Reed Business School in preparation for the next stage of his career.

There are almost too many to mention for Nikki, who’s successful career as an athlete spanned over 10 years. Though he does highlight taking a bronze medal at London 2012 – his home Olympics – as one of them. Winning five consecutive World Championships in a row between 2009 and 2013 was also pretty special for him, and although he had high hopes of taking gold in Rio 2016, he had to settle for the Bronze once more.

Life as a professional sportsperson

Nikki was able to devote himself to being an athlete full-time for several years, thanks to funding from UK Sport. And as a full-time athlete he would aim to be out on the water for up to 170 days per year – even more in the run up to big competitions. On top of that he’d be working with his sailing partner to make sure their boat was always in the best possible shape, with the right kit at the right time to be as fast as possible whatever conditions they might face. Logistics played a huge role in their team’s success.

Yet while “full-time job” may seem all-encompassing, Niki admits that one of the biggest challenges of being a professional athlete is not being able to switch off. “There’s always something you can be doing to be fitter, faster, better planned, and if you’re chasing a gold medal, it can feel like you’re not able to rest until you’ve got it.”

Of course, it’s great when you win, but picking yourself up after not achieving your goal can be tough. For Nikki though, it’s all about the preparation, and knowing he did the best he could. Nikki prides himself on being able to stay calm and in control, focusing on his own strengths and weaknesses rather than trying to point blame elsewhere or focus too much on the competition.

It’s quite an eye-opening experience when four years’ worth of preparation accumulates in a week of competition – which then potentially decides how the next four years of your life will be spent as well. If you don’t perform on the day, you could see your funding disappear and have to re-evaluate your entire life.  But Nikki says that mental setbacks are natural, though having the strength to keep going is what makes you into a champion.

Moving on from sport

Nikki is now a trainee accountant at Francis Clark at LLP, and focusing on learning the skills to be a good accountant become qualified in three years. It may seem like a slightly strange change of direction from sport, but Nikki wanted to do something he felt it was possible he could be good at, and as the kind of man who likes a challenge, the thought of taking 15 exams was too good an opportunity to pass up!

And while he might no longer be travelling around the world and taking part in huge competitions, at least he can now settle down, and spend more time with his wife, family and friends. “The hardest part of being a full-time athlete was being away from my wife and having to miss other big personal events, whereas now I’m more in control of how I choose to spend my time, and I just want to focus on passing my exams, getting qualified, and see what options open up after that.”

Nikki’s main advice to anyone in pursuit of a dream is hard work and determination. He says: “you need to keep going and never give up. If someone else out there has the same dream as you, you at least need to match them for effort or you’ll never achieve it.”

He also believes you need to enjoy what you’re going for, as your personal passion for your goal will make it worthwhile: “there’s no point in winning a gold medal if you hated every moment of your life in doing it.”

Thanks for all your words Nikki, it’s great to have you with us inspiring your fellow students.